Earlier this year it was announced that a stash of 75 silent films were being returned from to the ; this created enormous excitement among the silent film community. In September the Academy of Motion Picture Arts and Sciences presented 3 of the treasures: Strong Boy (Fox 1929) trailer; The Better Man (Vitagraph 1912); and the Fox Film, feature film Upstream from 1927 directed by JOHN FORD, I was there September 1, 2010 and in a booklet that was given out was a short little notice along with a wonderful screen-capture, which made my heart jump.

Among the treasures was a little romantic comedy called Won in a Cupboard.  According to Brent Walker, the working title was The Rube it was filmed in December of 1913 in Edendale at the Keystone Studio.  For years this 97 year old film was thought lost.  Yet on December 10, 2010 the Library of Congress screened it and in the audience were a number of film historians, one of the assembled was Robert Farr, the founder of Slapsticon, who has given me permission to tell you what he saw of course if you wish to wait I hope that Robert Birchard will be able to show it at Cinecon in Hollywood and for those attending Slapsticon in July maybe they will be screening it in Rosslyn Virginia.

But if you cant waithere is what Rob sent us, both shots he describes occur in the first half of the reel.

It is incredible!!!  I saw it at the Library of Congress-Culpeper yesterday and was totally blown away.  Not by Mabel's performance (though she was at her peak: lovely and full of life) but by her directorial touches.  Our first good look at Mabel is an amazingly well-executed "zoom" (actually a trucking shot) from a medium shot into a luminous close-up of her.  And the film historians I viewed it with (Stone, , Model, Kerkhoff) gasped at a particularly creative technique that I've never seen in any film, silent or sound.  Mabel is walking across a field toward her boyfriend, played by Charles Avery, who is walking toward her.  She shows this in a split-screen with Mabel on the left and Charles on the right.  Both cameras show the stars in a traveling shot so it looks like each actor is walking in place and just the backgrounds behind them are moving.  The two meet in front of a big tree where the two split-screen images merge into a single shot.

I think that once this film is widely disseminated, historians are going to have to take a harder look at Mabel's self-directed films and give her at least as much credit for innovation as anything done by Griffith, Guy-Blache, Ince, Arbuckle and Sennett.  If anything, the case might be made that her films co-starring Chaplin actually inhibited her technique because with such a strong co-star, the stories became more personality-driven.  Where are the other Mabel-directed films without Chaplin?

Won in a Closet 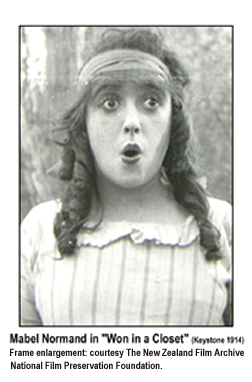