So who was Maurice Kahn?

Remember, a few months ago, there was a photograph on the internet of Mabel wearing her Pinto hat, personalized to Dr. Maurice Kahn.

This is what I now know; Maurice and Lee Kahn were physicians[1] who started their practices in Leadville . Dr. Lee Kahn became a renowned eye specialist. He practiced in Leadville, was an officer in state and local medical societies and author of articles on tuberculosis and eye disease. Lee married Ruth Ward, a writer. The couple had one son, , who died in childhood. Shortly thereafter, Dr. Lee died, at age 31. Some said he died of grief (the records indicate pneumonia). Maurice according to the Kahn Family left and traveled west to . Where he was one of the founders of Cedars of Lebanon Hospital and became Chief of Staff and Surgery in 1913. It was the first Jewish hospital in , when it opened on it was called , it was near . 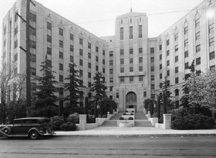 Who knows how many trips the Keystoners made to the hospital around the corner from the Sennett Studio?  In 1929 it is renamed Cedars of Lebanon .

In November 1921 as the defense in the manslaughter case of Roscoe (Fatty) Arbuckle[2] opened began, over twenty-five subpoenas were served to insure the appearance of witnesses among those named were Fred Fischbach, friend of Arbuckle and Dr. Maurice Kahn of .

Doug Fairbanks[3], when he was working on The Black Pirate in 1925 he cracked a rib and went to see his physician, Maurice Kahn, M.D. but didnt stop the film production.

Another of his patients was a Princess.  In 1926, the Princess Bibesco[4] the daughter of the former Premier of England, Earl Hubert Henry of Asquith was riding in Beverly Hills and fell from her horse but her physician, Maurice Kahn reported that she was not seriously injured.  Princess Bibesco was the wife of the Rumanian minister to the and friend of Mary Pickford.

I didnt find any reference to Mabel actually being one of his patients but it is obvious she knew him after all we have the picture.

[1] The Kahn Family, The Kahns of Leadville: Three Generations of Connections by Barbara L. Baer and Susan L. Silk

After Witnesses in Arbuckle Case